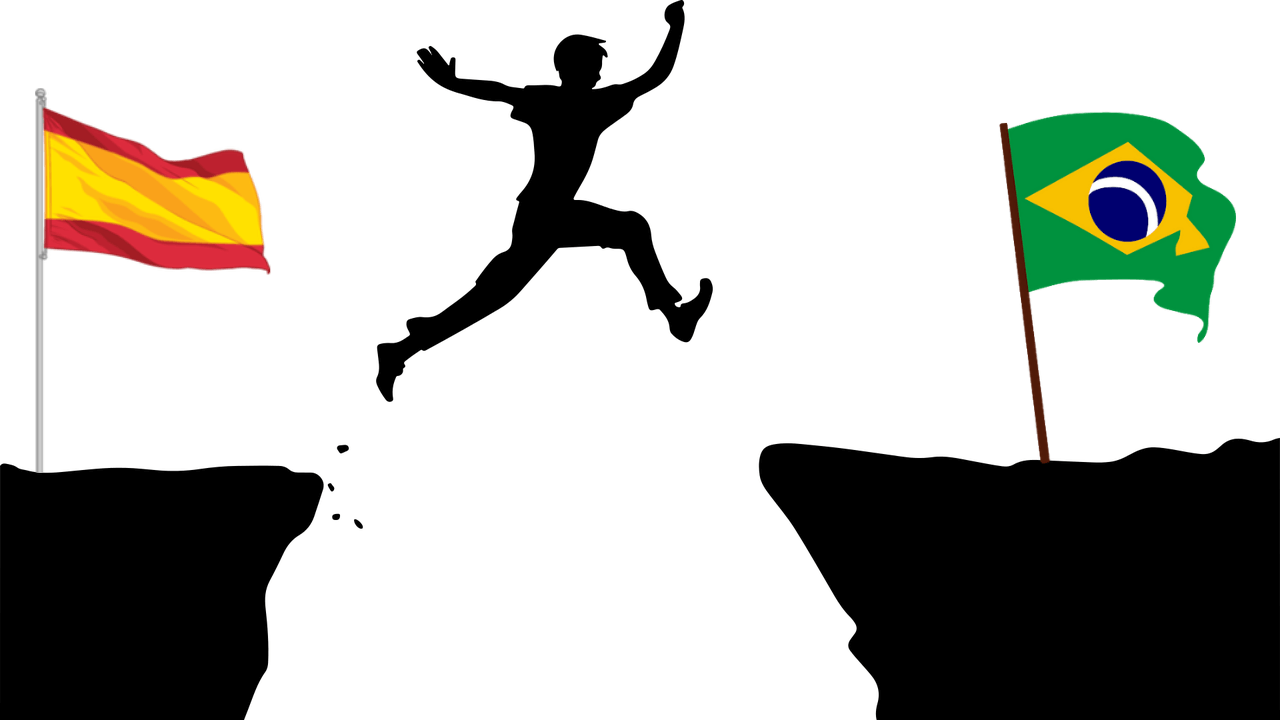 Spanish is like the cheat code for learning Portuguese. This is especially true if you learned South American Spanish, which has much more in common with Brazilian Portuguese.

However, knowing any variant of Spanish, or any other Latin language for that matter, will speed up your progress considerably.

However, you should also expect some interference between your native language, Spanish, and Portuguese.

Advantages of Learning Portuguese After Spanish

Portuguese and Spanish are the closest major Romance languages, so learning Portuguese is a logical next step after Spanish.

The languages share many similarities that give you a huge advantage in learning Portuguese.

Spanish and Portuguese have 89 percent lexical similarity, meaning shared or similar vocabulary. Watch out, however, as many of these words are false cognates. See the section below for more detail.

In addition, many useful rules of thumb exist to help you guess the Portuguese version of a Spanish word. For example:

In many ways, studying Portuguese actually reinforced my Spanish. The two languages are so similar that it was like a constant review of Spanish grammar and vocabulary.

Disadvantages of Learning Portuguese After Spanish

Being a Spanish speaker and learning Portuguese does come with some gotchas.

Portuguese pronunciation is much more challenging. Many Portuguese sounds, like nasal vowels, don’t exist in Spanish. It’s important to get the sounds right, or you could accidentally order pau (penis) at the bakery instead of pão (bread)!

Even city names can be misunderstood. Boquete is a popular tourist town in Panama. But be careful telling Brazilians about your great time in Boquete! In Brazil, the word means «blow job.»

Speakers of Colombian Spanish call a small bus a buseta. But don’t try asking where to catch a buseta in Brazil. Buseta sounds just like boceta, which means vagina in Portuguese!

While exquisite in English and exquisito in Spanish mean excellent or delicious, in Portuguese, esquisito means weird! So don’t compliment your host by saying «A comida está esquisita.» You’d be literally telling them how bizarre their food is. 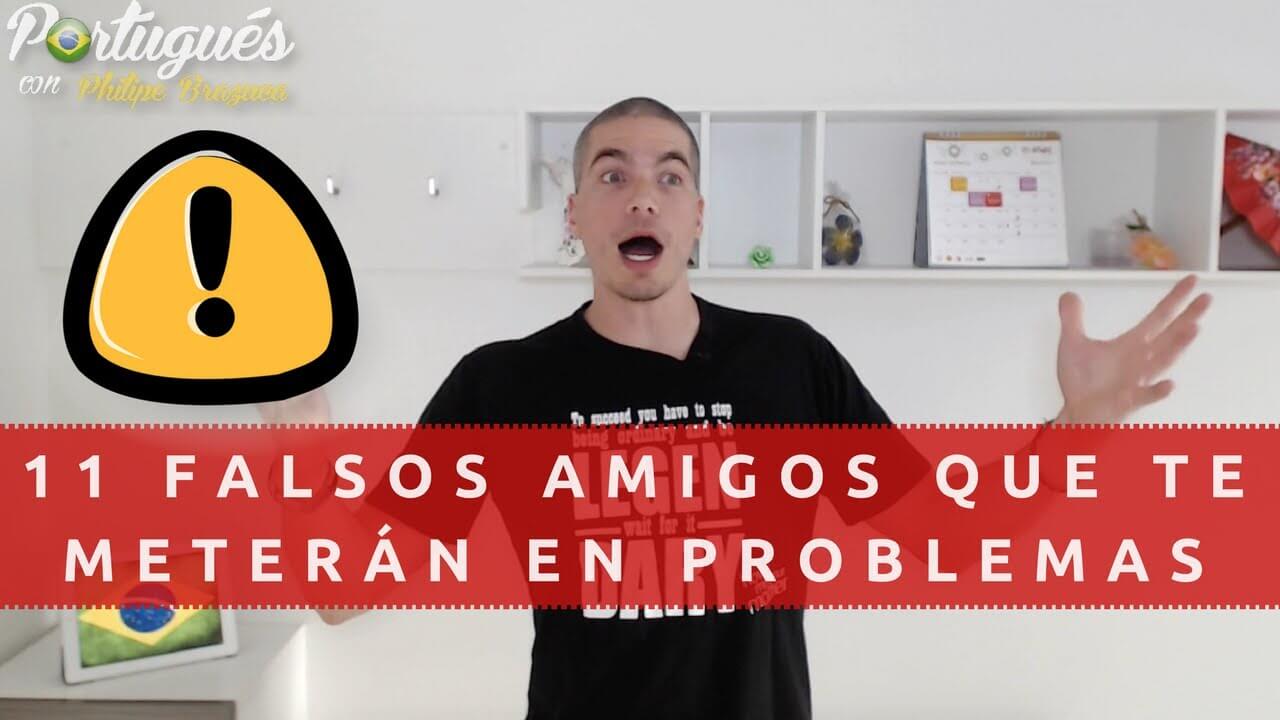 To avoid these and other embarrassments, watch this funny video on the top 11 words to be careful of in Brazil if you know Spanish.

There are also significant grammatical differences between the two languages. For example, object pronouns are used differently or omitted completely in Brazilian Portuguese.

Mixing up Spanish and Portuguese

The bane of Spanish speakers learning Portuguese is Portunhol, or portuñol! Like it or not, some Portunhol is going to sneak into your speech. The key is learning to reduce it over time.

Don’t beat yourself up for speaking ¨Portunhol¨. Even native Spanish speakers do it.

Expect a confusing phase at the beginning that you just have to practice your way out of.

If Spanish is important to you, continue your studies in Spanish and Portuguese simultaneously. This will train your brain to keep them separate.

If you’ve already reached a strong level of Spanish, invest just enough time to maintain it. I devoted about 90 percent of my study time to Portuguese and 10 percent to Spanish.

I kept up my Spanish chatting with friends and with occasional online tutoring sessions, podcasts, and movies.

As you gain fluency, you’ll progressively separate the two languages. Over a year of study, I’ve managed to reduce my Portunhol a lot.

Don’t miss this video with tips to reduce Portunhol!

Take a look at this list of Brazilian movies and TV Shows.

Immerse yourself in Portuguese

Learning to switch between Spanish and Portuguese comes with practice. It’s helpful to get to the point where you have an intuitive feel for both languages.

The best way to develop an instinctive grasp for Portuguese is to immerse yourself in Brazilian language and culture. Discover how to create your own immersion environment.

One really effective way to compartmentalize Spanish and Portuguese is to create a persona for each language.

Interestingly, when I speak Portuguese, my pitch gets higher. I also begin stretching out my vowels in that melodic Brazilian way.

You can have fun with this by using plenty of colorful Brazilian expressions. My Brazilian persona loves to use the interjection «Nooooossa,» with the vowel drawn out for maximum effect.

Experiment with incorporating expressive Brazilian hand gestures into your communication. Don’t miss Philipe’s video on some of the most common hand gestures. (I love the «tanto faz» gesture!)

Adapting to a Brazilian cultural context can even bring out a different side of your personality. My Brazilian persona is probably a bit more chatty and laid-back than her English-speaking counterpart!

Adopting this Brazilian identity or persona reminds me I’m in Portuguese mode and prevents Spanish from slipping in.

If you already know Spanish, it’s important to find a teacher knowledgeable in both languages. They will help you overcome the natural tendency to slip into Portunhol.

After decades of exposure, my Spanish was pretty well-established. An occasional Portuguese word did sneak into my Spanish.

Luckily, my longtime iTalki Spanish teacher also speaks Portuguese. He has a number of students who’ve made the leap from Spanish to Portuguese. He immediately catches my Portunhol errors.

As a Portuguese beginner, though, the effect was much worse. In my Portuguese classes I often found myself involuntarily mixing the two languages.

My Portuguese teacher on iTalki can also speak Spanish. He’s diligent about correcting me. Many of his students have similar issues with Portunhol.

My teachers at my Portuguese school in Rio were also very used to hearing Portunhol from their students. They were good at catching common errors and explaining the differences. 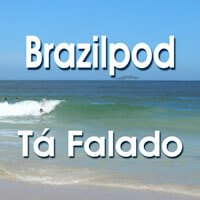 This outstanding podcast is for advanced beginner to intermediate students with a background in Spanish.

It’s by University of Texas at Austin’s well-known Department of Spanish and Portuguese.

Tá Falado provides an invaluable comparison and contrast of Spanish and Portuguese grammar and pronunciation. The focus is on colloquial Brazilian Portuguese. Explanations in English clarify the content.

The relaxed, humorous banter between the North American and Latin American contributors makes the show a lot of fun.

Free PDF transcripts are available on each episode page on the website.

For maximum benefit, listen to the dialogues while reading along in the transcript. The PDFs also contain interesting cultural and grammar notes.

This textbook can help you transition from Spanish to Portuguese. It’s designed for learners with a strong Spanish background.

The numerous similarities between Spanish and Brazilian Portuguese enable simplified grammar explanations. Text is in English.

The book’s academic approach and detailed linguistic explanations may not be a good fit for learners without strong Spanish skills. Those students may want to start with a more basic text like Living Language Brazilian Portuguese, Complete Edition.

Other verbs are completely different:

Watch out for false friends! False cognates — words that exist in both languages but with different meanings — can trip you up. Here are a few:

Enjoy exploring the gorgeous language of Portuguese. You may even find over time, as I have, that you prefer it to Spanish. Boa sorte e bons estudos!

More resources to improve your Portuguese 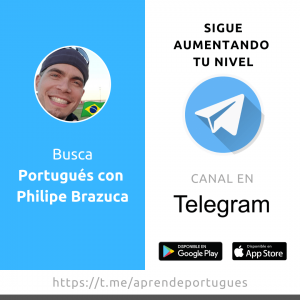 As we know back in school we had a second language to learn, English, Spanish, French etc, the pattern that I noticed during this time teaching Portuguese and English as a second language is that the vast majority of people don’t learn a language back in school, they barely understand what native speakers say, what they are good at is on doing textbooks exercises, filling forms and this boring drill that you probably already know.